Ever heard of the Wadala Experiment? It was an experiment carried out by the Indian Railways in order to curb deaths related to railway track crossing. The following experiment was the brain child of a firm in Mumbai called Final Mile.

It went on to become one of the most talked about experiments in which psychology and decision sciences were used to implement policies and regulate the target audience. Here it is:

This is Wadala, an area in Mumbai where a large chunk of deaths related to rail track crossing occurred. During rush hour usually around 45 people crossed the track per minute, and the reasons for such a large number of deaths were found to be the following:

1.Leibowitz Hypothesis : Evolution has primed us in such a way that we tend to perceive a smaller object moving fast towards us as more dangerous in comparison to a larger object moving at the same speed. This is because during our evolutionary phase, smaller and faster moving objects (lions, jaguars etc) used to kill most of the early humans, and not larger objects like elephants and rhinos. Thus over a period of time our brain became more attuned to and conscious of smaller and faster moving objects. This impairment lasts to this day, and thus people were not able to perceive the proper speed of a fast object such as a train, didn’t think of it as a threat, and crossed the railway track with complete disregard for the rules.

To counter this, the Railways painted the tracks yellow, so that the brain could use the tracks as a marker, easily register the distance being covered by the approaching train, and make conscious calculations on whether to cross or not. 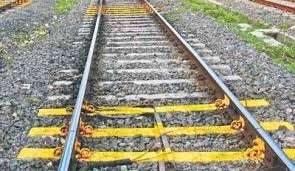 2. One can’t foresee his death: In a flight or fight response, the brain stops calculating the outcome and thus most often makes a wrong decision. To add to that, one can never forsee his own death, thus it becomes important that we show a person the eventual result that shall emerge if he instinctively acts according to the flight or fight response.

The Railways made posters of how a person may die if he acts impulsively. Such posters were placed at the exact locations where mishaps recorded were the highest, thus it was able to target the audience at the most vulnerable decision making point. The posters showed a person being crushed by a train, and this image made the crosser more conscious of their death. Hence they acted more carefully. 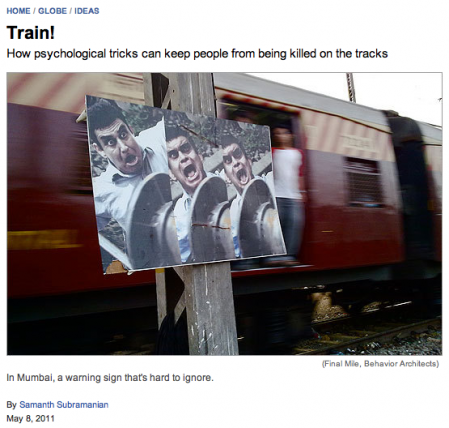 3. Cocktail effect: Our brain can register only one sound at a time, thus if there are too many sounds, the brain automatically filters out most of them. If the honking of the train is mixed with other sounds closer to the crosser, or with the sound of another train coming from an opposite track, then he shall filter out one of the sounds. In both the cases his decision making is impaired, and that leads to him being callous to the approaching disaster.

To counter this the Railways installed a whistle at the bend. This whistle was a reminder for the motor man to start honking.

The honking had a pattern. The brain calculates the meaning of a sound in between the pauses, so in place of one continous honk, pause was given between two honks. During the pause people became conscious of the distance at which the train was coming as larger intensity of the sound meant the train was nearer and thus the danger was high. This made the crosser to be more conscious and thus evade danger.

Using the psychological tricks, the Indian Railways decreased railway crossing related deaths by 70–75% and saved ₹50 crore (the annual budget to stop railway track related crossing deaths). The whole objective was achieved by spending in thousands and not in crores. The psychological hacks used by the railways stand as a testimony of how the government can use psychology to achieve objectives at a reduced cost.

Baalaganapathy is a Mechanical Design Engineer currently Residing in Lexington KY. He works in the Design of Commercial, Residential and Light Industrial Facilities (HVAC, Plumbing, Fire Safety). He is also interested in Sustainability, Energy Efficiency and the Environment. In his free time you will see him Shooting arrows, Golfing, composing Music or Exploring.

I am a Mechanical Engineer currently Residing in Lexington KY. I have a variety of interests, likes and dislikes. This page is an experiment with me Blogging my adventures. Do feel free to provide constructive criticism on the website (Design, Content, Layout etc)